skip to main | skip to sidebar

You can look at photos of a place like Mer and say, "Wow! That is so beautiful!"

And it is. I think it must be one of the most beautiful places on the planet.

But you can't smell the smells with a photo! (Well, actually, if you pick up one of our actual photos that has been on the island and sniff it closely you will detect the faint odor of mould ... but only slightly.)

It's a very alive place. It's crawling and swimming with all kinds of creatures. And it's hot, and moist. Getting into bed - imagine sliding into a bowl of warm porridge ... and being too tired to care. So you turn you face into the pillow and gulp the familiar mildew odour as you drift off into fitful sleep despite the sound of drums and feasting down the village aways.

After we got fly screens put into our windows there were less flies in the house, and the little brown beetles stopped trying to live in the back of the cassette player, and the big grasshoppers no longer flung themselves from wall-to-wall (and into the custard) in the narrow kitchen.

In that climate we did most of our living outside. We had a table under one of our huge mango trees and that was where we greeted guests, and had meals, and did our translating and studying mostly.

At one time we noticed that we had a fly problem at our outside table. It was quite obvious why - there was a strong odour of something that had died, and the flies were in search of the body.

We went looking for it too. This is what we found. Like something from another planet. We appreciated that this chap had the best of intentions - it was attracting the flies so it could eat them, and rid us all of flies. But not in our backyard, mate! It had to go.

It was only shortly after that that a botanist wandered through the village - happens from time to time - asking if we'd seen anything unusual. Naturally he was a little upset to learn of the demise of our alien friend.

You could hear the bell ringing from almost anywhere in the island. For most people it was an indistinct distant sound. But the bell tower was only a few metres from our house.

You might notice that the bell-ringer, Kenny Day, here is standing well back from the tower with the bell-rope at full stretch. Also, the bell is not in the top of the tower, but strung on a beam about halfway down. There is, of course, a story behind that.

The bell would normally be rung every day at specific times - 9am, noon, 5pm - and each time it was the same sequence of rings: 3, 3, 3, 9. It was supposed to be the voice of Jesus calling us to prayer. For most people it saved the bother of wearing a watch.

But when it was time to call everyone to a church service, the priest would ring maybe 70, or 100, or more times, depending on how desperate he was to get everyone there.

At Christmas there was a midnight service on Christmas Eve. In years gone by when people were more enthusiastic about their religion, everyone would come to this service. And then the whole congregation would have a procession around the village going from clan to clan wishing well and exchanging gifts. This would last until dawn, when everyone would return quietly to bed, or just sleep wherever they were at the time.

It was our first Christmas, and we were well aware that people were not as enthusiastic about the midnight procession - although Wilfred and Margaret and the kids were keen as they were with anything that might involve free food along the way. We lay in bed listening to the service one hour warning bell, counting the rings - well over 300. I sighed and turned over. Life in the tropics was so tiring and I was heavily pregnant.

Then we heard Father Tabo start ringing the second lot of bells. He was ringing as loudly as he could, pulling hard on the rope. He used to come out and stand right in front of that pink painted bell tower with its slightly lopsided look and yank hard on that piece of rope.

After only a few rings this time the bell made a strange noise, a kind of da-aa-aaa-aang ... followed by a heavy 'thud!' Then silence. I wondered if the bell had landed on Fr Tabo, but there were no cries of pain, only an eerie silence, so we went to sleep.

We were woken by the morning bell, as usual, but it seemed rather faint and distant for a change. Looking out the window we could see that someone had put a wooden beam across the very lowest strut of the tower, and hung the bell from that, barely above the ground. Fr Tabo had to bend right down to pull on the rope and get the clapper to ring against the side of the bell.

For a while very few people came to church. Partly because they couldn't really hear the bell from the other end of the village. But also because of the bad luck and bad magic - obviously the priest must have lost his power for the bell to have nearly fallen on him.
Posted by Ruth at 29.11.07

Flying in over Mer and Dawar The big white building with the point is the Anglican church. Our house is the tiny bit of white showing to the left of it, slightly up the hill. The tide is out and the reef is exposed. The air strip is on the top of the hill, the opposite edge of the volcano's ridge, which is not visible on the left of this picture. The airstrip was, of course, grass, and (although the photo above is obviously the 'dry' season) if it had been raining a lot and the grass was too long the plane would return to TI and wait for the men to get out there with scythes and cut it short enough. The 'strip was about 500metres long, formed by flattening out a section of the hill, and there was a sharp drop-off at both ends. The trip from the airstrip down the steep hill to the village was by tractor trailer. And what is it like inside those little planes? Our new verandah proved a great place to be. Our kids loved to play there, and sometimes the local kids joined them. Our kids loved to play school. Some might say that's weird - but my sister, brothers and I always played school too .. and my parents were both teachers. The island children were not generally allowed to play "role-play" type games, their parents would yell, beat them, or throw a fish-spear at them if they were caught ... obviously they didn't like to see the kids copying their behaviour! 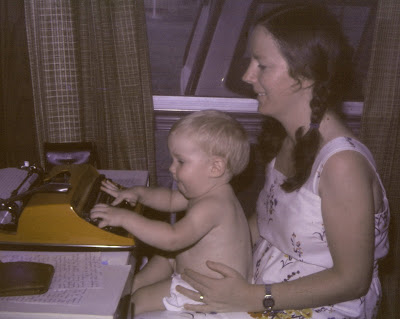 I wrote endless letters to my folks while we were on Mer, or "Murray Island" was the anglicized name. My mother kept all my letters, and I have just been browsing through them. So I am going to type them out - I find they make an interesting story for me and I am sure "the kids" will enjoy reading what I wrote about those times. I have italicized references to the kids so they (you: James, Ali, Jo, Bea) can find it easily.

We are enjoying our rest! So much space here - wish we could transport this big old house up to the island. The weather in Townsville this time of year is delightful - cool, clear and sunny. The kids are enjoying the two little boys who live next door (they are about 6 and 8). Their dad (no mum) gave us a huge colour TV (in working order). He's a bit of an electronics wizz - fixes TVs and gets landed with spare ones occasionally - he has three right now. So we are learning to sit back from it instead of pressing our noses against it like we have to do with our 5"screen TV!

The blood test results show that Alison, James and Peter all have/had hepatitis, not Jo and I. Peter's doing well now. Even manages long walks - but he's learning his limitations. There suddenly comes a point where he gets deeply tired. The only food he can't stand to think of now is crayfish mornay - that was the last thing he had before getting sick.

We've had a roo-bar put on the car - we are not very impressed though, bit of a shoddy job. Peter's fixing on a 'spottie' - we plan to do a bit of night-driving (when the kids will be asleep).

Alison went to the dentist yesterday. She was sooo good. She just lay there perfectly still and didn't complain at all. The dentist was really impressed. I was having such a lot of pain myself, I actually made an appointment to have a tooth pulled. But a couple of hours before my appointment I got the bright idea to see a doctor first - I persuaded a doctor to fit me into his busy schedule. Sure enough - retracted ear drum. So I cancelled the appointment at the dentist's with great relief. Things are slowly improving now.

Kids are getting rather obstreperous, time to give them a bit of full attention. James usually ends up having some private time with me after the others are in bed at night. Peter just sleeps ...

Ruth
I am officially retired and staying put in a quiet suburb near the beach, after living in the Torres Strait in the '80s (A MERry Life), 2 years in China (Howling Pigeons of LongHu), a year in Turkey (Turklish Adventure), working in the UK (The British Job, and Porridge in Norwich), working in Saudi Arabia (Howdi Saudi), holidays around the Pacific (Not Riyadh), working in Queensland (How woomba is TOOwoomba, and Brisbane Master Class), and working in Malaysia (For we are jolly good fellows).

My Other Blogs - go take a look!